Village Hall is located at 130 Cedar Street South and was initially built-in 1890. Since that time, Village Hall has been remodeled three times, once in 1905 and then again in 1966. The most recent renovation took place in 2002, converting the former fire department into office space, police department, and council chambers and allowing the building to become handicap accessible. The original Village Hall with bell tower still prestigiously stands and serves as the Mayor’s Office.

The Wheeling and Lake Erie Railroad brought many passengers through the village in the late 1800s. The Werner Inn stands on the corner of State Routes 44 and 172, initially offering shelter to those traveling through the village. The Osnaburg Historical Society owns and operates the inn and has brought it back to its original prestige with much of the period furnishings of the 1800s. During the 1800’s Werner Inn also served as a tavern. Just across the street stands another historical inn of the period that is privately owned. 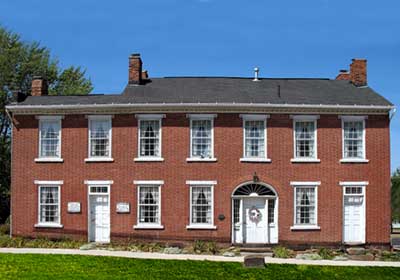